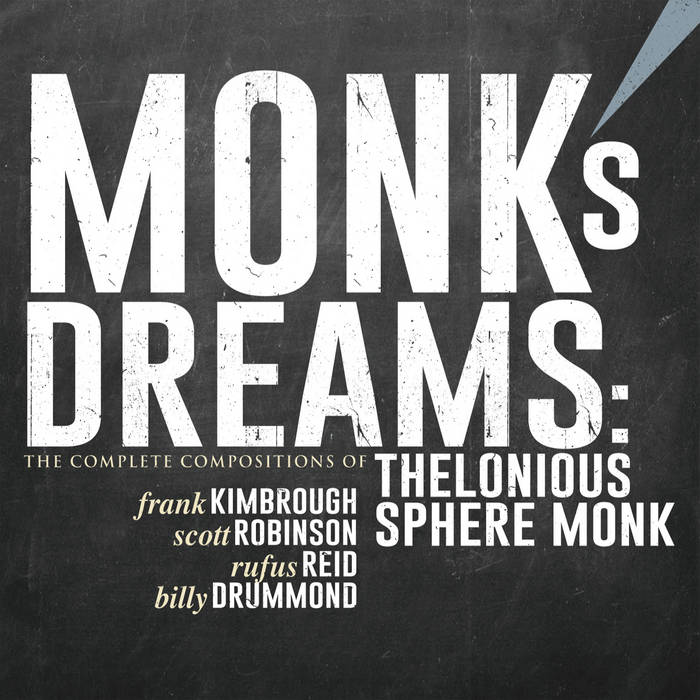 The genius of pianist and composer Thelonious Monk is unassailable. Since his death in 1982, he has become recognized as one of the greatest composers of jazz – and of the wider world of music. The year 2017 was the centennial of Monk’s birth, and brought scores of tributes, including a well-received stay of pianist Frank Kimbrough’s quartet at the Jazz Standard club in New York City.

Like many jazz pianists, Kimbrough found Monk’s music a revelation when he first heard it. From the outset of his career, Kimbrough has returned time and again to Monk’s compositions. After nearly four decades of study, reflection, and performance, Kimbrough has established a relationship with these pieces and found a way to express himself through the prism of Monk.

When the Standard approached Kimbrough to put together a quartet to play Monk’s music, he picked the brilliant rhythm section of bassist Rufus Reid and drummer Billy Drummond. His choice for lead horn voice was the multi-instrumentalist Scott Robinson, with whom he has played for many years and in many combinations, most notably with the Maria Schneider Orchestra.

After the first set of the October 17th, 2017 performance at the Standard Kimbrough’s friend Mait Jones urged that the group record Monk’s entire oeuvre, a feat that Kimbrough had never considered. A jazz fan and co-presenter of his own Princeton series JazzNights Jones began a lifelong appreciation of Monk when he heard the master live at the Five Spot in New York City in 1957.

Over the next few days, Jones doubled down on his intent to make the project reach fruition, bringing in his friend and fellow jazz head, Dr. Dorothy Lieberman, to help co-produce the effort.

The musicians began the intensive work such a project demands. Finally, in April of 2018 Kimbrough led a trio and then the quartet at Jazz at the Kitano, polishing 30 new tunes on the way to the full Monk catalog of 70 pieces.

For the recording, Matt Balitsaris provided his renowned Maggie’s Farm studios and an optimistic plan of recording a disc’s worth of material each day for six days. The musicians recorded each day from 11 to 5 or 6 in two three-day intervals broken up by a three-day respite. Miraculously this ambitious plan succeeded, with most tunes needing only one or two takes. Robinson picked his axe of choice on the spot, from the standard (tenor sax and trumpet) to the exotic (bass saxophone, echo cornet, bass clarinet, and contrabass sarrusophone). The resultant tracks are fresh, varied, and inspired.

Highlights of the group’s takes on these classic pieces include Robinson’s juggling of trumpet and tenor sax on “Thelonious” and the ensemble’s free-wheeling energy on “Skippy.” “Locomotive” is the picture of peaceful beauty, whereas “Jackie-ing” is all jumps and starts. Reid and Robinson play beautifully on “Reflections” and a lovely solo performance of “Crepuscule with Nellie” showcases Kimbrough’s command of the piano and Monk’s language.

The recordings form a fantastically diverse collection. On the six-CD set, titled Monk's Dreams: The Complete Compositions of Thelonious Sphere Monk, Monk’s compositions are played in various configurations, most by the quartet, but others in smaller combinations, even solo piano. The package also includes beautifully penned liner notes from Nate Chinen (New York Times, WBGO and NPR) along with notes from members of the ensemble and the producers of the album.

Bandcamp Daily  your guide to the world of Bandcamp